On Sunday, the Qatar 2022 World Cup, the first to be held in the winter months, kicked off. To Wales’ good fortune, Ukraine fell just short in qualifying for this year’s tournament. However, Ukrainians here in London, at home and beyond will still be watching and supporting our friends who have done so much for us since Russia’s invasion.

That is why we will be proudly flying the flag for the home nations. The UK Government’s support for Ukraine has been unprecedented and unwavering. To date, Britain has given Ukraine £2.3 billion of military support, committed £220 million of humanitarian aid, and is set to support repairs for the significant damage done to energy infrastructure. That’s not mentioning the support for 135,000 refugees who fled to the safety of these isles and were welcomed in by families up and down the country.

Other European countries have also helped, not least our brothers and sisters in Poland, who have welcomed 1.4 million Ukrainians. Close to 1 million have settled in Germany and hundreds of thousands more are scattered across other EU member states. With football as our national sport, there is no better way for Ukrainians who have fled and those who remain to be united again, through the World Cup, even if it is just for a mere 29 days.

Whilst temperatures in Qatar for the opening ceremony will be over 30 degrees, temperatures on the front line in Eastern Ukraine will have dropped to around 3 degrees. As Ukrainian forces continue their incredible fight back against Russian offensives, soldiers will be gathered around any device they can find to watch at least some of the games. It will bring some welcome respite from the brutal conditions. Football has a wonderful ability to act as a force for progress and as a catalyst to unite people from different backgrounds and cultures. This World Cup, as the first to be held in the Arab world, is perhaps the epitome of that.

There have been calls from some to boycott Qatar, some UK MPs among them, over justifiable concerns about the lack of LGBT rights in the country. In my view, it is much more valuable to engage, and use the stage to highlight international challenges such as Russia’s invasion, the resulting energy crisis, and broader issues from climate change to global inequality. Leaders should use the tournament for dialogue and unite people at a moment in history when we are deeply divided.

One perfect example of this is Poland’s captain and Barcelona striker Robert Lewandowski, who has pledged to wear Ukrainian colours on his sleeve during the games to show solidarity with Ukraine. In a special event in Warsaw, he received the blue and yellow armband from one of Ukraine’s footballing heroes – Andriy Shevchenko. When Ukraine played Scotland in a World Cup qualifier earlier this year, Scotland fans gave a standing ovation to Ukraine supporters walking through George Square. Moments like these show solidarity and unity between people, even if the competition on the pitch is as fierce as ever!

2022 will be remembered as one of the most painful years in Ukraine’s history. The World Cup will certainly not change that, but it can serve as a symbol of some hope to Ukraine that its people have not been forgotten, and as a reminder that our neighbours will continue to stand behind international law and oppose Russian aggression with every diplomatic tool available.

I will be watching and cheering on Gareth Southgate and his men. I will also be looking to grasp the World Cup as an opportunity to support Ukraine, I hope others will as well.

By Yuriy Lysenko, co-founder, and Partner at Sterling Law 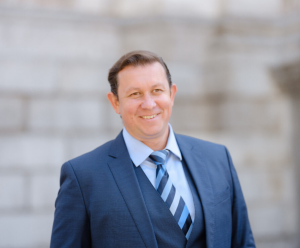 LBN Publisher
Always on the chase after hot and trending London and UK business news that disrupt, inform and inspire.
Previous article
Will Snoop Dogg and Gordon Ramsay open a Restaurant in London?
Next article
How to Overcome Jet Lag when Traveling from London to New York

Press Release: Major Call as Rolls-Royce And EqualEngineers Join to Celebrate Diversity Heroes at The Prestigious Ceremony in London

How to Setup a Limited (Ltd) Company in the UK?

3 Steps for Businesses to Survive after Lockdown